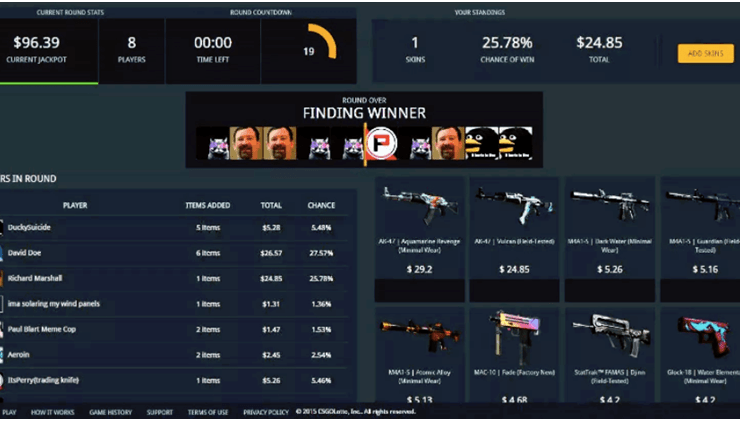 Counter-Strike is one of the world’s biggest and longest standing esports titles, having seen its first release back in 1999 and starting to develop the esports scene in the early 2000’s, it has went through many iterations and many changes and has helped define many parts of modern gaming, and even helped to develop the esports betting scene as when looking for cs-go betting you’re met with many of the best sites that have been available from the very beginning. But Counter-Strike betting hasn’t always been around real money betting, as it instead started in skin gambling from the slot like mechanic of loot boxes that has now become common in almost all gaming platforms available.

Back in 2013, an update came to the game that brought about the first release of what is now largely recognized as common loot boxes, in what would among the first examples of the mechanics – these loot boxes contained cosmetic items for the game which shortly after released and included an online marketplace to buy and sell these items with the rarest fetching a very high price. This marketplace is what led to a skin gambling industry which in just a few short years would quickly reach a value of $8 billion, with the main bulk of this coming from players betting these cosmetic items on upcoming games before a more familiar betting market became available.

2016 signalled some change, however, as changes from the game developer Valve would signal the end of the skin gambling market – changes to the way the loot boxes work had been the first step to hold less resemblance to slot machines but still hold a similar look, but changes to the way the games trading system worked made it more difficult for players to be skins on games and receive winnings in return too. Whilst skin betting does still exist and there are betting markets focussed purely on skin trading, they are slowly fading as skin gambling as a whole is slowly becoming less available, and options for more legitimate betting are becoming more available too.

As more eyes turn towards loot boxes and towards the links to gambling, it’s expected that these mechanics will slowly look to be phased out and replaced or outlawed all together as these links towards gambling become stronger with more research, but it did signal a very interesting period of time where an entire betting market was instead largely focussed around a gambling base, and how quickly the gambling scene that had developed has been replaced and is disappearing entirely.

previous article
What Should You Consider When Researching Family Vacations?
next article
Look for the Online Poker Choices That you Can Easily Make